Luigi Ballerini, nice to meet you! 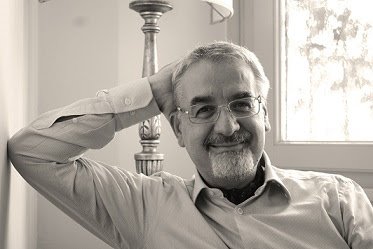 Luigi Ballerini was born in Sarzana, near La Spezia, Italy, and lives in Milan. He is MD, psychoanalist working with children, teens and their families and a well-known Italian children and YA literature writer.
He  was awarded the Italian Andersen Prize in 2014 and the Bancarellino Prize in 2016. His novels have already been translated in many languages.

Find Out Team has sold rights
to Russia for a few of his successful books!

A coming-of-age novel that tells the story of a single day and the story of a whole life at the same time: exams, Summer vacations, love and true friendship, that kind of story that never leaves you on your own, all the way to the end. It reminds us of how much each second of our life is really worth living.

Giacomo does not have much confidence in himself and doesn’t know what to do with his future. It’s the day of his High School final exam, and he wonders what’s going to happen next. The only certainties in his life are Fabione, Giacomo’s best friend, and Martina, a girl whose troubled past continues to torment her, and keeps her from letting herself go and loving Giacomo.

Once exams are over, Giacomo and Fabione are planning an adventurous Summer holiday on the beaches of Puglia, in the southern part of Italy. But the adventure gets to a bad start. Giacomo is plagued by a wicked headache, he feels like a high-speed train is racing through his skull; and Fabione breaks his ankle playing soccer just a few hours before leaving. But they’re not going to let anything stop them, for whatever reason. They get in the car and drive to Gallipoli, with Giacomo at the wheel. They’re in for a thousand miles of adventure, freedom, sharing and secrets.

This is friendship, this is life… and it could all come to an end very quickly.

My Father Was Wrong

Marco’s mother is a real estate agent and often takes him with her when she shows houses for sale. One day, going around the rooms of a dark and gloomy apartment, Marco sees a boy and does not understand if this is a ghost or a dream. He only knows that that strange little red-haired boy, who spends his days locked in his room not to hear his father’s screams, is extremely unhappy. And he will be able to see and relive his story from a different perspective!

Cesare is attending the second year of High School. One day he is suddenly hit by an epileptic seizure at school. A “click” indicates the arrival of a crisis, like a switch that turns off his conscience.

The book follows Cesare and his group of best friends and a girlfriend during a normal but very intriguing schoolyear: Mattia who was in a coma for a week after an accident and woke up convinced to have been kidnapped by aliens; Tobia who – to rebel against his mother bothering him to prepare his suitcase for a school trip – eventually decides to leave his case at home and just wears all he needs; Tommy, met in hospital and soon become a new trusted friend; Leti, beautiful and patient, with whom Cesare is in love.

The novel is about the curing power of friendship and love while dealing with the unique effort of growing up.

All the Sky Above Us

Adele and Lorenzo meet each other by chance one Summer day, when a downpour forces them to take refuge in a dry place in a bar. They want both to enroll in a theater course, but they could not be more different. Adele is reﬂective, she likes to read and sit on her own, while Lorenzo is the classic handsome guy, all muscles that would never even look at her. Or at least that’s what Adele thinks…

And while they gradually learn to know each other better, to open up to each other, to fall in love, the strangest thing happens in their lives. Because that bar is anything but normal: that bar with classic Fiftys’ furniture and old-fashioned music opens a door to the past. A gap that will force Adele to come to terms with the mystery that surrounds her father’s life, whom she has never known but whom she has never even forgotten.